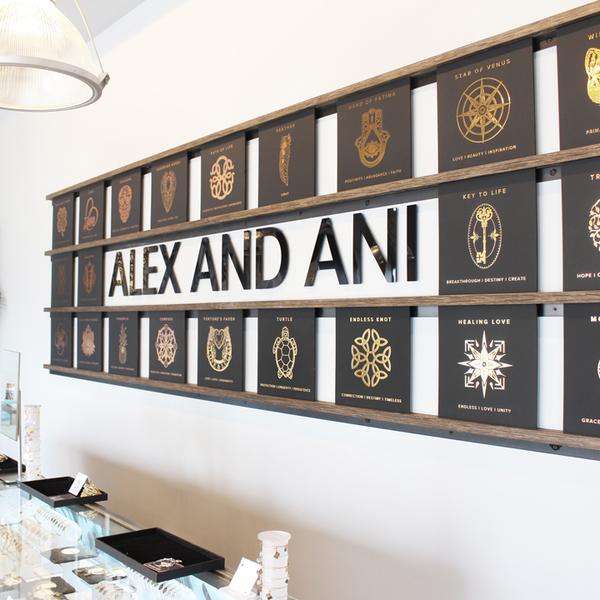 an American jewelry producing retail business, founded in the name of the first two daughters of the owner ‘Carolyn Rafaelian’ in 2004 located in Cranston, Rhode Island. The company originally established with the motive of enlightening the mind and empowering the spirit by producing high end quality jewelry items. New century, celestial chic bangles, bracelets, necklaces, earrings, and rings are Alex and Ani's specialty. Carolyn learned the trade as an apprentice to her father before taking over his Rhode Island jewelry factory in 1966 to produce beautiful, eco-friendly jewelry.From design to execution, Alex and Ani reflect 50 years of Rhode Island craftsmanship. More than 1,500 workers put their enthusiasm and resources into the company's goods.Further to that, the company claims that they not only make jewelry in Rhode Island, but that they also make a difference in the state.The first Alex and Ani shop opened in Newport in 2009, and the jewelry was sold in other multinational department stores throughout America in addition to the standalone stores.Alex and Ani is dedicated to giving back to society through its "Charity by Design" series, through which it collaborates with a variety of organisations on issues ranging from health and wellbeing to empowerment, children's well-being, and environmental preservation. The company's "Charity by Design" programme collaborates with charities to develop one-of-a-kind charms that tell their stories.The association with the United States Army, the National Football League, Major League Baseball, the National Hockey League, the Olympics, and 62 separate colleges around the US has been one of Alex and Ani's most significant achievements.The business creates all of the official jewelry for a variety of sports teams and universities. It is also the brains behind the jewelry creation.Alex and Ani's profits have soared from $5 million in 2010 to over $500 million in 2016, according to insiders, with a net profit margin of 23%, according to private equity database Pitchbook.

Not quite everyone's cup of herbal tea. Rafaelian's goods, on the other hand, enable a generation that seeks authenticity to wear their passions on their sleeves. "There's no doubt that jewelry like Alex and Ani has become something that the buyer covets now," says retail investor Christopher Burch, who backed both his ex-wife Tory and Alex and Ani rival BaubleBar.In general, Alexi and Ani is a brand deeply embedded in spiritual wisdom and a sincere reverence for tradition and ancient heritage, which influences both the nature of its jewelry and its dedication to giving and sharing, as well as its commitment to its hometown of Cranston and the state of Rhode Island.